Vauxhall introduced the facelifted version of the Grandland at the beginning of 2022, and, besides the aesthetic changes, it came with a technological upgrade as well.

Vauxhall is the British cousin of the European Opel, and both brands have been under the Stellantis group since the beginning of 2021. Strangely, though, while the facelift for the Opel Grandland came on the market in the summer of '21, the British-badged version appeared only in the spring of 2022. Both cars were related to Peugeot, the provider of the technical platform which is used for the 3008. Citroen took that for the C5 Aircross, and after that, Opel and Vauxhall got it for the Grandland.

From the outside, the most striking part was the front, which sported a fascia covered with a black panel where the Vauxhall badge took center stage. Its swept shape on the sides resembled a knight's armor visor, and that is how Opel described it: Opel Visor. Following the same marketing strategies, the British carmaker named it Vauxhall Visor. The full-LED headlights fitted as standard could have been upgraded to an ItelliLux system, which was comprised of 168 LEDs for each headlamp. Depending on the trim level, the crossover featured black pillar roofs, offering a coupe-like appearance.

Inside, there was a new dashboard design with two displays. The touch-screen that sat on top of the center was for the infotainment system, while the up to 10" LCD in front of the driver served as an instrument panel. Like its predecessor, the seats were certified by the "Aktion Gesunder Rücken e.V." (campaign for healthy backs) for their ergonomic shape.

Under the hood, the carmaker offered a choice of three powertrains: one with gasoline, one diesel, and a plug-in hybrid version. The latter version offered a pure-electric range of 39 miles (62 kilometers). 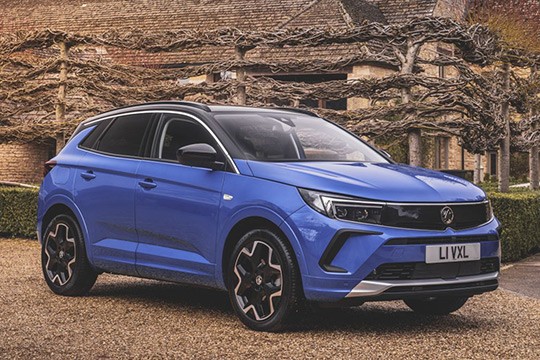