-This is the sixth generation of the Corsa and the model's roots go way back to 1982. Now, the German brother of the PSA group has launched a new generation of its small car, but some might say that it is very close technically to the new Peugeot 208. The new generation of the Vauxhall Corsa is the same vehicle as its german sibling with Opel emblems

The styling, of course, is genuine Opel and, for the first time, it is available with LED headlights on the whole range, regardless the engine type.

For the bodywork, the manufacturer decided to put the car on a drastic diet, reducing its base model weight bellow 1000 kg (2204 lbs), which is impressive if we take into account that the vehicle is equipped with all the mandatory modern safety features.

For the engine department, Opel offers a small range of variants, gasoline and electric. The base model has a 1.2-liter three-cylinder gasoline engine with 75 HP, while the top version is a pumped-up turbocharged version of its base model, but offers 130 HP. They worked hard to keep the fuel consumption low. According to the newest WLTP form, the new Corsa can use between 3.6 and 6.1 liter/100 km (65.3 mpg – 38.5 mpg) depending on the engine.

For those who are willing to pack a full list of options on a city car, the Corsa can be equipped with an 8-speed AT transmission. The base models has a 5-speed manual transmission, though. 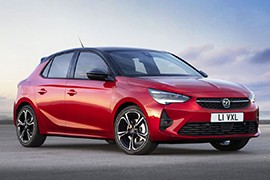