When Opel introduced the Corsa's first generation in Europe, Vauxhall chose a different badge and named the 1982 small-segment vehicle the Nova. It switched to the Corsa designation only from the second generation in 1993. Fast forward to 2014, and the British carmaker introduced the last Corsa designed and engineered by General Motors since the American carmaker sold both brands to Peugeot-Citroen in 2019.

The front fascia featured the "wing" shaped headlights, which incorporated Vauxhall's signature and LED daytime running lights. Its reversed trapezoidal grille featured the chromed Vauxhall badge, and a lip-spoiler adorned the lower part of the apron. An arched rear side window amplified the sporty look of the three-door version, while the sculptured doors and rear fenders made the car look longer.

Inside, the Corsa featured five seats but with limited access for the rear passengers. The dashboard was simple and plain on the base models, with a center stack where the carmaker installed the radio and climate controls. On higher trim levels, Vauxhall installed a new infotainment unit with a 7" touch-screen. In addition, it featured connectivity with Apple CarPlay and Android Auto.

Vauxhall offered the Corsa a choice of five gasoline and two turbo-diesel engines paired as standard with a six-speed manual or a six-speed automatic, depending on the version. Its top-performer sported the traditional badge VXR and provided 140 hp, transforming the little hatchback into an urban pocket rocket. 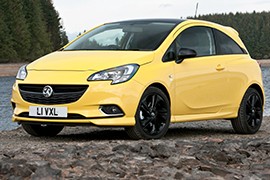