The British carmaker TVR had a different way to build their vehicles, and their performances proved that they did it right.

TVR was not like vanilla or chocolate ice cream. It was more like a bar of chilly chocolate, and if you didn't like the spiciness, you'd better just walk away. It didn't have any assistance features such as ABS, ESP, or airbags. In 2005, TVR went under Russian management who wanted to improve the old Tuscan, and they did it, somehow.

For starters, there was a new front fascia with fewer holes for the lights. While the Tuscan's non-facelifted version featured four holes with lights inside for turn-signals, high and low beams, and stationary lamps, the 2005 model had one less. At least, the manufacturer installed a clear cover for them. To access the vehicle, there was a small switch under the door-mirror. In the back, the designers redesigned the taillights and moved them upper on the quarter panels. Previously, these were almost hidden on the lower part of the bumper. And if you can't see any fuel cap filler, that is because it was under the trunk lid, on the inside part of the quarter panel.

TVR fitted the interior with the minimum requirements for a supercar: sport-bucket seats, a radio, and a steering wheel. The AC was on the options list.

But the most impressive parts of a TVR were from its technical part, where the roadster tipped the scale to just 2547 lbs (1155 kg). Under the hood, the British car manufacturer installed a 4.0-liter engine offered in a few power options, ranging from 360 hp to 400 hp. There was only one transmission option, a 5-speed manual. 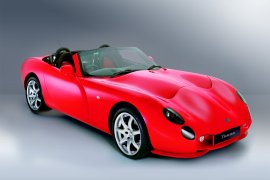