When the British car manufacturer TVR introduced the Tuscan, it didn't consider that its customers would like more power for the light and agile sports car.

Yet, they asked for it!

In 2001, TVR unveiled a higher-powered version of the Tuscan, named Tuscan S. It was a similar car as its lower-powered sibling but brought more tire-shredding torque to the rear wheels. And, just like its brother, it wasn't offered with a standard stability-control nanny to keep the driver safe on the road.

TVR built the Tuscan in an old-fashion way, by hand. There were no industrial robots or special computerized tools to machine the vehicle, but there were a bunch of high-skilled workers who put passion and pride in their work. Finally, the Tuscan S looked like no other car on the road. Except for its non-S version, obviously. Its triple headlamps on each front fender were completed by a tiny additional round light for the DRL system. The holes in the front bumper were made to make the front end lighter. Since the carmaker built the Tuscan S on a chassis, it offered it with a targa-roof, which required a one-person job to remove and store it in the trunk.

Inside, the Tuscan S featured a carefully crafted interior that combined leather, polished aluminum, and polished brass. Its buttons looked like they were taken from a jewelry shop, not from a car manufacturer. Still, TVR didn't consider to re-arrange the pedals or installing an automatic transmission, so it was still difficult to drive.

Under the hood, TVR installed a straight-six, 4.0-liter gasoline engine that produced 390 hp. It was the most powerful naturally aspirated engine in the world. It was like a go-kart on steroids. 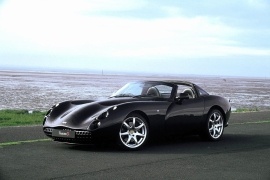