The British carmaker TVR produced a hard-core sports-car without ABS, ESP, or other electronic nannies to keep the car on the road.

For some, it was too hard-core.

While some sports-cars customers asked the carmakers to fit automatic transmissions and special luxury items, the British motorists hoped to see a vehicle built in an old-fashion way. TVR gave them exactly that with the 2001 Tuscan. It made it without any industrial robots or computerized tools. It did it with a bunch of high-skilled workers who put passion and pride in their work. Finally, the Tuscan looked like no other car on the road. Its triple headlamps on each front fender were completed by a tiny additional round light for the DRL system. The holes in the front bumper were made to make the front end lighter. Since the carmaker built the Tuscan S on a chassis, it offered it with a targa-roof, which required a one-person job to remove and store it in the trunk.

Inside, the Tuscan featured a carefully crafted interior that combined leather, polished aluminum, and polished brass. Its buttons looked like they were taken from a jewelry shop, not from a car manufacturer. Still, TVR didn't consider to re-arrange the pedals or installing an automatic transmission, so it wasn't easy to drive by someone who didn't appreciate the hard-core British roadster concept.

Under the hood, TVR installed a straight-six, 4.0-liter gasoline engine that produced 350 hp. It was paired exclusively with a five-speed manual. 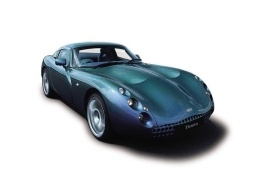