The TVR Tamora was manufactured by the British manufacturer between 2002 and 2006 and was available in a single body style, namely a 2-door coupe.

It was revealed in 2000 at the Birmingham Motor Show and delivered to the buyers in 2002.

What was interesting is that the Tamora was described as one of the entry level cars in the TVR sports cars lineup, being available for only 43,460 pounds. The car’s intended purposes was to offer a race experience included in a street car.

Similar to the T350, this new model is equipped with an engine developed by TVR, namely a 3.6 liter 6-cylinder engine which can produce 350 horsepower. This means that the T350 could reach a top speed of 260 km/h, being able to accelerate from 0 to 100 km/h in no less than 4.2 seconds.

Being a sports car, the interior looked accordingly. The analogue readout included speed and engine revs and the driver could also see the engine water and oil temperature, along with the outside air temperature.

For the buyers who wanted to take the car on the track, a sport pack was available, a pack that contained extra readouts with lap times included.

The Tamora had a side-opening hatchback which ensured an unexpected trunk space and an easy loading. 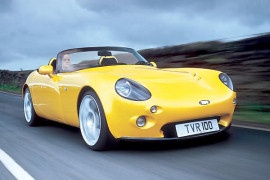