TVR had to give up on its big round headlights to make the Cerbera looks more appropriate for the 21st century, and it did that by introducing a facelift in 2000 for the 1996 model.

While the British car manufacturer was still independent in 2000, it decided to introduce a facelifted version for the Cerbera lineup, improving the vehicle's look. But while its design department was busy working on the car, the engineering department was concerned about doing something else than improving the engines.

The most striking difference between the 1996 and the 2000 model year was the front. TVR deleted the classic round headlights surrounded by a chromed ring. It replaced them with three scoops on each side: one for the low beam, one for the high beam, and the third one for the turn signals. They took the idea from the Tuscan but re-arranged the lamps. The redesigned bumper sported the fog lamps.

Inside, it was the same unusual interior as in the 1997 model. It still featured the same vent under the steering wheel flanked by a clock and the fuel gauge. A CD stereo found its place on the dashboard, next to the main instrument panel. TVR insisted on installing the wipers, the washer, the horn, and the lights on separate buttons on the steering wheel. The only stalk it provided was for the turn signals, and it was on the right side.

All four engines offered as an option for the Cerbera were ranged between 350 hp and 440 hp, and they sent their power to the rear wheels via a five-speed manual transmission. 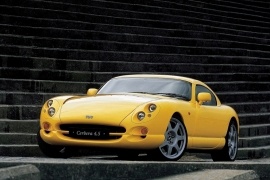