Toyota introduced a second facelift for the Rav4's third generation in 2010, a generation that was only five years old.

The carmaker tried to make a signature front fascia for its entire range, and most of its cars started to look like they borrowed the headlights from one to another. On the plus side, it was easier to spot a Toyota without wondering the brand. Only the model.

The slimmer yet angled headlights made room for a thicker front bumper, and the car designers rushed to add larger fog lights in the apron. Its waved grille, with three slats in a reversed trapezoidal grille, wore the company chromed badge in the middle. As part of the pedestrian protection equipment, Toyota shaped the apron and gave it a small spoiler, which was meant to catch the pedestrian legs and not ramming over. The carmaker replaced the quarter panels to make room for the bigger, redesigned taillights in the back.

Inside, the carmaker installed a new steering wheel with a sportier look. On the center stack, a revised navigation system, fitted as an option, was optimized.

But the most important updates were on the technical side. Toyota introduced an evolved IADS (Integrated Active Drive System) that could vary the torque distribution from 100:0 to 55:45, depending on the surface condition. When the system detected a dry paved road, the system sent all the power to the front wheels, allowing the car a better fuel-efficiency. 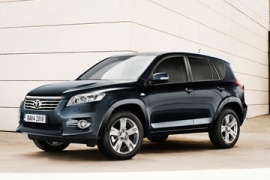