3 The 2023 Toyota Sequoia TRD Pro Is a Hybrid, but Is It Efficient?

Toyota introduced a refreshed version of the Rav4 in 2009 and improved the drivetrains and the vehicle's safety systems.

With an increased demand for safety systems and more powerful engines, Toyota included specific aero packages for the 2008 Rav4. Moreover, it sported redesigned fog lights trims, and taillights. Apart from the 4WD version with the Sport Appearance Package, all vehicles featured a redesigned rear step bumper with a black protective mold. Toyota also installed new 17" light-alloy wheels for the Base and Limited grades.

To increase the comfort, Toyota started to offer a convenience feature with a key-less entry system for the Limited grade, where the driver just had to have the keyfob in the pocket and grab the door handle. In addition, the integrated XM Satellite radio was a new standard feature. At the same time, the Sport and Limited grades received a low-cost navigation system. In addition, the carmaker added a new fabric material for all versions, while the Sport grade received an exclusive charcoal leather.

Under the hood, the Rav4 received a major upgrade with the new 2.5-liter inline-four and a fresh V6 powerplant. Both versions were available with a front or all-wheel drive system. Thanks to the new powertrains, the car was quicker and offered an improved fuel efficiency compared to the older engines. 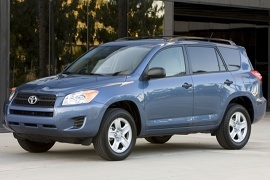