It was built to offer both performances on the road but still remain a tough offroad-er.

Despite having another version of the Toyota Land Cruiser, the 120 model, the Japanese car-maker decided to offer a more luxurious model, which was to continue the J100 model. Since it was a large SUV, it was fitted with diesel or gasoline V8 engines only.

The 2011 facelift brought a new front bumper design, with different fog lights on the corners. The headlights went through some changes, which affected the turn-signal lamps. Other subtle changes were adopted for the taillights.

Inside the car, the cabin was designed to provide a high level of comfort. The Land Cruiser 200 was available only in a luxury specification and it was fitted as standard with four-zone climate control, navigation system with HDD and a JBL sound system. The seven-seat layout allowed the rear seats middle seats to be folded into a split 40:20:40 system and the two rearmost seats folding to the side.

The 2011 Land Cruiser 200 was fitted as standard with a 6-speed automatic transmission. For the permanent all-wheel-drive system with a Torsen center differential. The transfer box allowed the driver to select a fixed 50:50 torque distribution and to select a low-range gear. 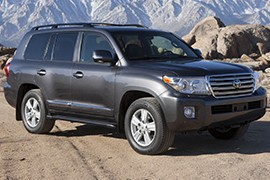