Toyota continued the Land Cruiser saga with a new generation in 2009.

Even if it did look like a facelift for its predecessor, it was a new vehicle.

The Land Cruiser had already started to forget its hard-core off-roading skills and adopted a front independent suspension ever since 1996. Even though that led to shorter wheel travel in off-road situations, it also made the car more comfortable during daily use. And that increased the sales.

At the front, the fourth generation of the Land Cruiser/Prado showed a new front fascia fitted with a chromed grille with vertical double-slats. Its headlights didn't sport that rugged look from its predecessors. Instead, they were swept back towards the upper sides of the front fenders. From its profile, the five-door version looked more balanced than its three-door sibling. It was longer and featured an extended wheelbase, making room for the rear doors. At the back, since now they had enough room, the automaker's engineers deleted the spare wheel from the rear door tailgate and moved in underneath the vehicle.

Inside, the Land Cruiser provided plenty of room for five adult passengers, with two bucket seats at the front and three on the split-folding bench in the back. The carmaker also offered a seven-seat option for selected markets, with two additional jump-seats in the trunk. The dashboard design was inspired by regular cars with a driver-oriented layout. Toyota installed the infotainment unit underneath the center rectangular vents atop the center stack.

Under the hood, Toyota installed a choice of gasoline and turbo-diesel engines, depending on the market. All of them were available with either a six-speed manual or a five-speed automatic, with manual mode. It sent the power in all corners via a two-speed transfer case. 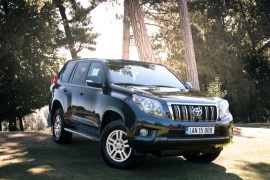