In 1998, Toyota introduced the Land Cruiser 100 as an up-market, comfortable but truly hard-core off-road vehicle.

The Land Cruiser is a worldwide respected name from Australia to Alaska and South Africa to the North Pole. It's a reliable vehicle that could go almost everywhere. But the Land Cruiser customers started to ask for more comfort. So, the carmaker introduced the J80 in 1990 and the J100 eight years later. For those who asked for a rugged vehicle, Toyota built the J105, which featured solid axles both front and rear, unlike the 100, which offered a more comfortable ride due to its front independent suspension.

The exterior was rounded, continuing the design trend started with the J80 series, but since the car was more prominent, its curves were hard to notice next to the large and flat body panels. Its enlarged wheel fenders emphasized the go-anywhere capability, while the body-colored door mirrors and the side-steps brought a touch of comfort and luxury for its owner.

Inside, Toyota offered the J100 with a wide choice of features and upholsteries. From a standard, manual gearbox, cloth seats, and a manual air-conditioning unit to a full version fitted with leather seats, climate control, and sunroof, the J100 had many options to choose from. A new suspension system made the ride even more comfortable for all the seven passengers that could fit inside the cabin thanks to a set of jump-seats in the trunk.

Under the hood, the J100 featured a 4.7-liter V8 gasoline engine for most of the markets. In some countries, Toyota installed a 4.2-liter inline-six turbodiesel, an engine known for its low-end torque. 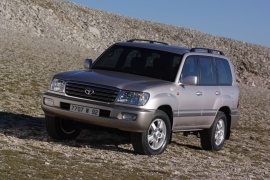 4 Toyota Says It’s Sorry You Have to Wait So Long for Your Car, We All Know the Cause

5 The 2023 Toyota Supra Manual Can Now Be Configured in the U.S., Some Patience Is Needed