The eighth generation of the Toyota Hilux came on the market with a second facelift in June 2020, after the one introduced in 2017.

The Hilux was known for its reliability and trustworthy capabilities. The pick-up won the Dakar rally-raid race, the North Pole, and the Icelandic volcanos. Its rugged chassis and reliable drivetrain made it a great choice for off-roaders as well.

The 2020 model came with essential updates at the front fascia with a redesigned grille and LED headlights. From its sides, the 2020 double-cab Hilux featured 18" light-alloy wheels. It looked more like a lifestyle utility vehicle than a utility truck with that design and stylish exterior elements. In the back, the new LED taillights improved the car's visibility.

Inside, Toyota upgraded the Hilux interior with a new design for the dashboard and driving post. On the center stack, an 8" infotainment unit combined the car's entertainment and other information on the same screen. The enhanced multimedia system featured a new touch-screen and incorporated both Apple CarPlay and Android Auto. A JBL sound system was available.

Under the hood, Toyota installed a revised 2.8-liter turbodiesel unit. It gained few horses even if it had to comply with the stricter Euro 6d emission regulations. A 6-speed manual was fitted as standard while a 6-speed automatic was on the options list. 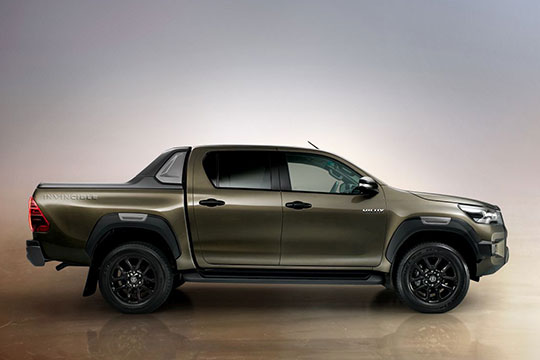