2 1994 Toyota Supra Gets Detailed to Perfection, Does Celebratory Burnouts

4 Toyota Land Cruiser 70 Series Lives On for MY2023, Might Go Hybrid or Get Downsized

With the GT 86, Toyota revived its fun-to-drive affordable sportscar segment that died long before. The GT 86 was built from the ground up to put a smile on your face, bringing back the pure driving essence. The 50:50 weight balanced coupe follows the oldschool sportscar recipe: a naturally aspirated gasoline engine at the front, traction at the back and a manual gearbox in the middle. There's an automatic version on the table too, but that will spoil the fun. With 200 horses at the tap, some might say it's a bit underpowered, but we'll tell you it's enough to make the rear end stick out through the corners, thanks to skinny Prius tires. Even so, the wide aftermarket tuning kits will make sure you can upgrade its engine quite easy. Inside, you'll find a dashboard inspired by the old Toyota 2000GT. However, it's done in plastic and wood trimmings are nowhere to be found. You get two sport seats, knee cushioning on later versions, a decent infotainment system on the higher spec model, Bluetooth connectivity, air conditioning, push-button start, electric windows and mirrors as well as paddle shifters on the automatic model. Some markets sell a very basic model, with unpainted bumpers, steel wheels and no interior amenities, to make it more easily to transform it into a track car. 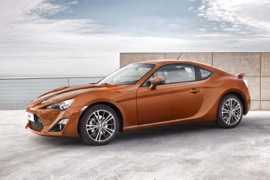