Toyota introduced the Toyota GR 86 in 2021 and improved the car in all areas while it kept a similar look as the GT 86 sports car.

Designed and engineered together with Subaru, the GR 86 made its entrance in style at the 2021 Goodwood Festival of Speed. It proves that the new version could provide what its predecessor lacked: speed and power.

With its long hood and short, swept-back cabin, the GR 86 retained the same image introduced by Toyota 2000GT in 1967. At the front, the menacing headlights above the aerodynamically profiled bumper, with a broad grille on the apron, received two side scoops that channeled the air into the wheel wells to cool the front discs. From its sides, the widened front fenders received slim and tall vents to extract that extra air trapped behind the wheels. The car’s muscular lines were emphasized by the “shoulders” over the rear fenders, while at a duck-tail enhanced the tailgate’s look.

Inside, the most important upgrade was the 7” TFT multi-information display placed inside the instrument cluster. Designed with analog-looking dials, this will provide a few layouts. For the track mode, the tachometer took center stage, while in other driving modes, the speedometer was in the middle. Like on its predecessor, the GR 86 featured high-bolstered seats, ideal for high-speed cornering.

Technologically, the GR 86 featured aluminum roof and front fenders. Thus, the car had a 53:47 weight distribution. The Gazoo Racing engineers stiffened the car with diagonal cross members on the front suspension and a full-ring structure to the rear. Under the hood, Toyota installed the Subaru-sourced engine enlarged to a 2.4-liter displacement thanks to a larger bore. For track-oriented customers, the carmaker offered the GR 86 with a six-speed manual, while an automatic transmission with paddle-shifters was on the options list. 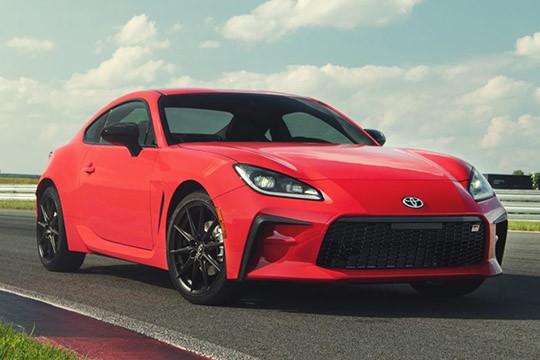