3 Unimpressed by the Design, Independent Rendering Artist Gives the Toyota GR 86 a Facelift

While the station-wagon market was going down and made room for a new generation of crossovers, Toyota insisted on building the Corolla Wagon and facelifted it in 2004.

Toyota introduced the ninth generation of the Corolla in 2000, and four years later, it refreshed the entire range. The compact vehicle was available as a hatchback with three- and five doors, a sedan, and a station wagon. The latter was available on specific markets and proved to be a good choice for customers looking for an affordable but spacious vehicle.

From the outside, the Corolla Wagon kept the same front image as the rest of the range. The carmaker designed a new bumper with a different lower side and round fog-lights instead of the rectangular ones used on the non-facelifted version. That was needed to comply with the new pedestrian protection regulations. From the sides, the car had the same shape as the non-facelifted version, and the roof-rails were fitted as standard.

Inside, there were a few changes for the dashboard, which featured different colors. The Japanese carmaker installed a new steering wheel with the buttons mounted on the left spoke instead of a lower side. Thanks to the split-folding bench in the back, the trunk could have been expanded from 402 liters (14.2 cu-ft) up to 1480 liters (52.3 cu-ft).

Under the hood, Toyota installed new, Euro4 engines for the European market and added a new, 1.4-liter turbodiesel unit. 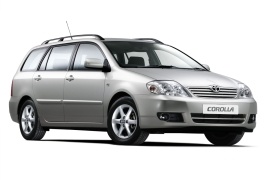