Toyota unveiled the first generation of the Rav4 SUV in 1994, and it was built on the same platform with the Corolla.

In 2020, the Japanese car-maker introduced a new crossover based on the Corolla: the Corolla Cross.

By 2020, the Corolla was the most successful Toyota ever built. It was sold in over 48 million units since 1966 in over 150 countries around the world. The Japanese car-maker decided to use the well-known nameplate and added the Cross after it. The new model was unveiled in Thailand in July 2020.

Toyota built the Corolla based on the TNGA*1 platform (GA-C), which helped the car-maker upgrade it with new bodywork. The same platform was used for the C-HR model, but while the CH-R featured a sportier look with a hatch-back style, the Corolla Cross offered a more conventional, SUV-like profile. The car's front side looked aggressive, with narrow headlights and a massive grille that was complemented by the black apron and a silver shield. The sculptured panel doors and the widened rear quarter panels confirmed the rugged styling. In the back, the designers decided to install a roof spoiler on top of the tailgate.

Corolla Cross offered up to five seats inside and promised a more significant headroom for the rear passengers. Since the car featured the same wheelbase as the C-HR, the legroom was the same. For the instrument panel, the Corolla Cross took more elements from the regular compact sibling. A floating-type infotainment unit was installed on top of the center stack. The instrument cluster featured the same analog dials as the Corolla.

Under the hood, the Corolla Cross offered a 1.8-liter engine or a Hybrid system carried-over from the C-HR. Both versions were mated to a CVT transmission. Toyota offered the Corolla Cross as a front-wheel-drive only. 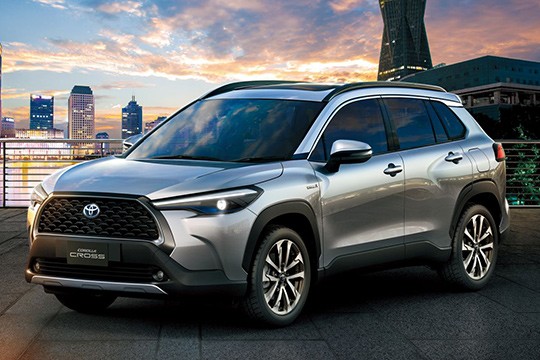