For 2016, the CH-R was the Toyota’s take on the crossover market, successfully combining a coupe-like design with a high driving position - CH-R was the acronym for the Coupe High Rider.

The CH-R was ultra-modern both inside and outside. The cabin was fitted with a futuristic central touchscreen that controlled almost everything, while the uncluttered dashboard was easy to use.

Soft materials with touchy feel finishes were used throughout the cabin and the supportive seats offered great comfort.

A small downside was represented by the low rear visibility generated by the rear pillars. With the small windows in the back, the rear cabin did not have an airy feeling and not much light could get inside.

The cargo area was not the best in the class, with a capacity of only 377 liters. While the rear seats could be folded, they could not be folded to the same level as the cargo mat, thus we could not say they folded flat to allow easy storage of bigger items.

Fitted with a comfortable suspension, the CH-R handled bumpy roads pretty well. However, the AWD version was stiffer than the 2WD one.

The steering was light enough for easy manoeuvring around town and precise enough to perform well on the open road.

Overall, the CH-R was an enjoyable car to ride with a distinctive, stylish exterior look. 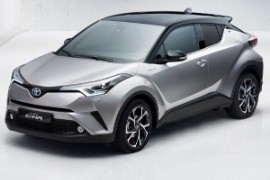 1 Toyota's Version of the Hummer Is Called the Mega Cruiser, Here's a Detailed Review

3 2023 Toyota Corolla Updated Across the Range in Japan