Despite being a serious SUV manufacturer, Toyota didn't have any small-segment crossover on the European market, but that changed in 2021 when it launched the Aygo X.

Spelled like Aygo Cross, the new version of the Aygo was an answer for Ford Fiesta Active, Dacia Sandero Stepway, and other cars from the small segment on the European market because that's where it introduced it.

Adding more black, unpainted plastics around the wheels and a plastic, silver shield under the front bumper wouldn't be a complete makeover for a car. Yet, the little Aygo showed an SUV-inspired stance. It also featured a slightly higher ground clearance than the non-X version by 11 mm (0.43"). Sure, that didn't transform the small-segment Aygo into a true off-road beast, but it helped their drivers tackle the curbs easier while parking. Just to show more appreciation for this version, Toyota added unique colors for the Aygo-X.

The car's interior also offered more features and youth-oriented amenities, such as a 300W sound system with a subwoofer in the trunk. Even though that cut its share from the overall 231 liters (8.15 cu-ft) trunk space, it was more appreciated by young customers. If they needed to do some shopping, they could have folded down the rear seats.

Toyota equipped the Aygo-X with all the safety features in the storage, including advanced automatic braking systems and pedestrian and cyclist detection. Moreover, only one engine was available for the powertrain: a 1.0-liter, three-cylinder naturally aspirated unit that provided a mere 71 hp. 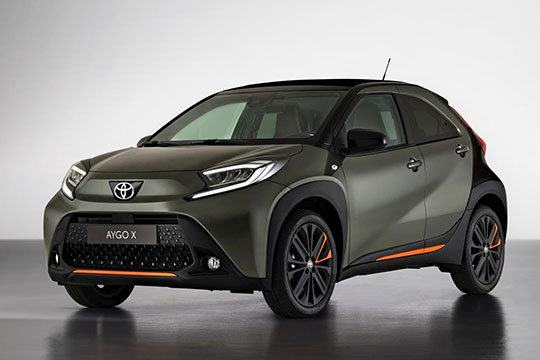