The upgraded Avensis differed a lots from the model it replaced, offering two new engines borrowed from BMW.

The exterior design was refreshed, all the panels were new and LED running lights were included.

While it was built on the same platform, the interior was redesigned. The cockpit looked familiar, but slightly changed with tunnel dials and an LED coloured display with several functions including safety features and sat-nav.

The biggest 8-inch touchscreen display could be controlled by touching, of course, and by using the physical buttons.

The center console was also refreshed, still offering the same single cup holder and another cupholder placed under the armrest, not the most efficient place to mount it if you ask me.
The plastics used were of good quality, however, easily scratchable.

The rear seats passengers could easily enjoy journey with the decent legroom and headroom, as well as a child in the middle seat would be comfortable due to the flat floor in the middle.

With great room for passengers and a decent cargo space, the Avensis also had a good fuel consumption. As it was designed for mostly motorway journeys, the Avensis could take 5 L/100 km. Not bad at all! 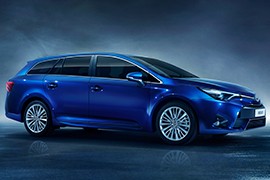