Toyota tried to get more money from the Prius' platform and introduced the first generation of the Aqua compact-segment hatchback in 2012.

Despite its modest success, it tried again in 2021 with a second generation.

The hybrid vehicles were not successful from the start. Prius tried hard to make a name for itself when it was launched, but in the end, it became a highly successful nameplate. On the other hand, Toyota needed to make more money from that hybrid platform and introduced the Prius C, which became Aqua.

For the 2021 model year, the Aqua showed the same compact size as its predecessor but with a styling that made it different than the hybrid-powered sibling Corolla. At a glance, it might not even pass as a hybrid vehicle due to its broad black grille at the front. Its rounded-shaped trim that adorned the front bumper and the small headlights mounted lower in the bumper suggested more of a sporty five-door hatchback than an eco-friendly vehicle. Its sculptured side panels and the roof spoiler enhanced the car's dynamic appearance.

Inside, the carmaker installed bucket seats with high bolstering. The dashboard featured a floating-type 10.5" touch-screen above the center stack. A fully digital instrument cluster showed all the important information needed by the driver. On the center console, Toyota installed a compartment for a smartphone, while the gear-selector was attached on the dashboard's edge. For the rear passengers, the carmaker installed a split-folding bench profiled mostly for two passengers, even though there was a third headrest for an occasional middle passenger. 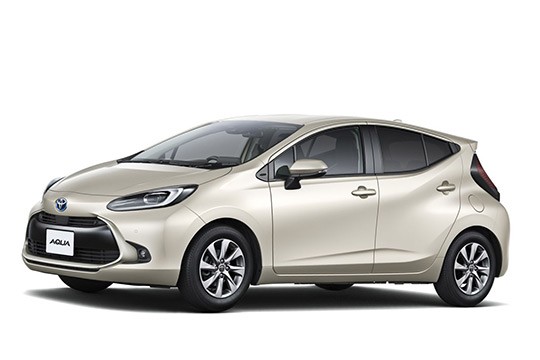