Toyota introduced the fifth generation of the 4Runner in 2009, and it was already a known, trustworthy SUV desired by those who didn't want to go chasing animals through the forests.

With a vast off-road experience, Toyota had it's saying on the SUV market, especially on the mid-size segment where the 4Runner sat. Even though it was introduced as a less-utilitarian version for the HiLux, it became a closed-body vehicle with four doors and a tailgate. Moreover, it was also available with a 2WD system. But for the off-road enthusiasts, the carmaker offered a Trail version, which was more capable with a low-range gear and rear locking differential. After all, it was based on the same FJ-Cruiser ladder-chassis.

The exterior design was more of an improvement over the fourth generation. Its blacked-out grille and prominent, angular headlights made the car looks business. The flared fenders were already a styling signature for the 4Runner, and the customers required that. Behind the four doors with black grab-handles, the carmaker added a raked-forward third window. At the back, a roof spoiler adorned the top of the tailgate.

Inside, the 4Runner shared some of the ideas found in the Lexus GX460. Its beefy controls from the center stack were made to be operated with gloves on. Its triple-pad layout in the instrument panel looked sporty, with the speedometer in the middle, the tachometer on the left, and three gauges on the right sharing the same dial. In the back, the carmaker installed a 60/40 split-bench where three adults could fit well. A third-row sitting bench was optional. With all the seats down, the 4Runner offered 2,548 liters (90 cu-ft) of space, while with all seats in place provided (1,217 liters) 43 cu-ft. 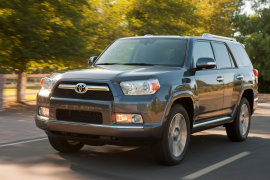