The fourth generation of the Toyota 4Runner was introduced in 2002 and it followed the basic principle of its predecessors, featuring a body-on-frame construction and a rugged driveline.

The 4Runner evolved from a modified pickup truck, such it was the T100, to an SUV but without damaging the off-road abilities. Since the third generation, the 4Runner designers were focused on the daily driving needs, offering more comfort and amenities for the driver and passengers. It was offered even in a 2WD configuration, for those who were on the market for an SUV, but didn't need traction on all four wheels.

On the outside, the 4Runner kept the rugged appearance, with a chromed grille for the SR5 trim level and 16” light-alloy wheels. For the Sport Edition, the 4Runner was equipped with 17” wheels. The Limited level added another inch to the size of the wheel.

The interior was fitted as standard with 5 seats but up to seven were available for the SR5 and Limited. The third row could have been removed to clear-up more room for the trunk. For the infotainment unit, there was a 360-watt JBL AM/FM 6-disc sound system with 10 speakers and a 9” LCD screen for the rear-seat entertainment. A navigation system was part of the options list, with a 7” LCD screen.

The 4Runner was available either with a V6 or a V8 for the North American market, but more engine choices were available in other countries, including a 3.0-liter turbocharged diesel engine. 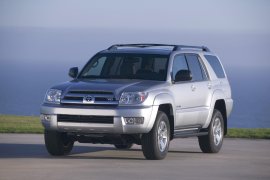