The Tata Safari was introduced on the market in 1998 and it featured a body-on-frame structure that was kept along the way. It was transferred to the 2012 model Safari Storm, which was very similar.

Tata is one of the biggest car-maker in India and it owns the Jaguar-Land Rover group. Despite having one of the most experienced off-road brands in the world, it didn't rebadge one of the British vehicles. It just improved the existing Safari.

The exterior look is very similar to the original, 1998, Safari. The front and the rear were changed. A new pair of headlights with clear lenses were introduced. In the back, the biggest change was the removal of the tailgate-mounted spare wheel. It was moved under the floor. From the side, the only change was to the rear-view mirror cases, which were chromed. The high step inside the car was kept, but it was a price paid for the big ground clearance.

Inside, the Tata said that not a single screw or bolt was carried-over from the non-facelifted version. Apart from the after-market look of the CD-radio installed in the center stack, everything else looked better. A new finish in wood grain, chromed lines, and better finishes were the main improvements brought by the Safari Storm. The leather upholstery was offered as an option. In the trunk area, the Storm offered two additional side-mounted seats.

Under the hood, the Safari Storm offered a new 2.2-liter diesel engine with a variable turbocharger that offered 156 hp. It was mated as standard to a 6-speed manual. The braking system was upgraded with disc-brakes in all four corners. It was available as a 4x2 or a 4x4 traction system. 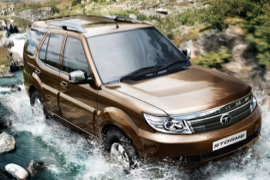