Launched initially as a hatchback version for the better known Indica, it was sold mainly in India. The connection with the Indica name, which is associated mostly with cheap taxi vehicles, was a drawback for some of the customers. Other than that, the three engine choices, from which two were diesel and one was gasoline, offered decent power and fuel consumption for the Indian market.

The base engine was a 1.1-liter gasoline unit with 68 hp and 98 Nm (72.3 lb-ft) of torque. The other two engines were 1.3- and 1.4-liter turbodiesel engines with 88 hp and 70 hp, respectively. No, this is not a mistake. The smaller engine had a higher power output since it was the more updated 1.3-liter Multijet engine from Fiat.

The bodywork was, basically, a shortened Tata Indica, sharing the same platform. The car was 3.8 meters (12.5 ft) long and had a small, 232 liter (8.2 cu-ft) trunk. But it had the minimum requirements for what the Indian car market needed. The only standard features were the power steering and the air-conditioning. The top version was also equipped with dual airbags and seatbelts for all the seats. No ABS was offered for the Indica Vista. Due to the low sales, the Vista was withdrawn from production in December 2015. 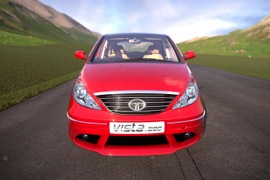