Tata Indica was the first car designed with the Indian customer in mind, and Ratan Tata was the driving force behind it.

After eight years since the market liberalization in India, Tata unveiled the Indica at the 1998 New Dehli Auto Expo in Pragati Maidan. The audience was keen to see the new car, which promised to be cheap to buy, cheap to run, and tailored for the Indian market.

Ratan Tata didn't trust its design department from Telco Industries, who knew how to create trucks and buses. He relied on the Italian I.DE.A design studio, and the result was a modern-looking vehicle that could feel at home either in the suburbs of New Delhi or in any European city. Its rounded shapes and curved headlights followed the new-edge design theme, which was just revealed on some other European cars.

Inside, despite the low-quality materials, the Indica showed a modern look. Its curved dashboard featured an open storage area in front of the driver and a digital clock in the middle, at the base of the windshield. Tata installed the ventilation controls on the upper side and the audio system underneath it on the center stack. The Indica didn't feature any sound system for the lower trim levels and left that job for their owners. Despite its small size, the car could accommodate up to five occupants inside, but with very limited legroom for the rear-seat occupants.

Under the hood, the Indica was the only direct-injected diesel engine on the Indian market for many years. It was a fuel-efficient vehicle but with inferior performances. The other option was a 1.4-liter gasoline unit. Later on, the Indica received better powerplants and improved interiors and materials. 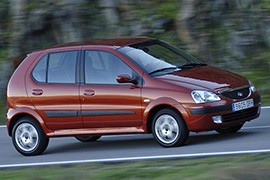