Suzuki was known as a great manufacturer for small cars and Swift was one of their main products that came to support that statement.

In 2020, the Swift was revived with a facelift.

In 2017, Suzuki introduced the fourth generation of its super-mini range, the Swift. It offered a new design and new technologies, that made it go further and be trusted on the market. By 2020, some of the technical solutions needed to be replaced, and the facelift version fixed that.

On the outside, the design remained almost unchanged, but there were few details that made the 2021 model look different. For starters, there was a new mesh for the grille instead of the former horizontal slats. The headlights were slightly redesigned. There were slight modifications to the rear of the car.

Inside, the first modifications were made to the instrument cluster. The dials were slightly different. In the tachometer, the coolant temperature gauge was now circular instead of a quarter circle as before and the same went with the fuel level gauge installed inside the speedometer dial. For the 2021 model, the button for the lane-keep assist was placed on the right side of the steering wheel, in the lower spoke.

Under the hood, the Swift went through important modifications with the introduction of the mild-hybrid systems. A 1.2-liter engine offered 83 hp and was built for a better fuel-efficiency. It was fitted with an Integrated Starter Generator (ISG) as well. The 1.2-liter unit was available with a CVT transmission for the front-wheel-drive versions. In some markets, the 2021 model was offered with an all-wheel-drive system. 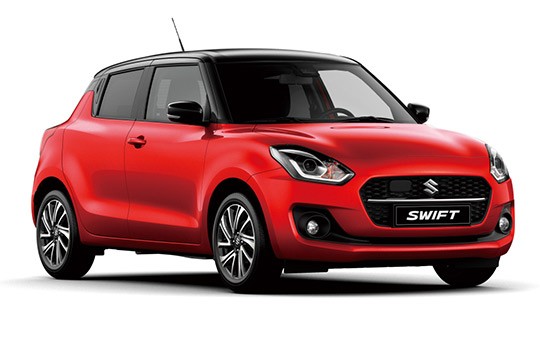