Starting with the third generation of the Swift, Suzuki deleted the three-door version and offered only the five-door model.

Suzuki had a respectable experience in building small vehicles, and it proved that many times. The Swift was its best-known product in the city-segment, and it tried to make it even better. For the 2017 model, it didn't care that much about a budget-priced vehicle. It tried to make the car better and hoped that the customers would love the car—worth saying that the market fulfilled its expectations.

The Swift's styling followed the same proportions as its predecessor, but with rounded lines and even softer edges. At the front, the big mesh-grille filled the space between the hood and the lower spoiler. On the sides, the swept-back headlights with LED daytime running lights showed a similar shape as those installed on Swift's third generation. The carmaker tried to make the hatchback look like a three-door vehicle while it installed five doors from its sides. Suzuki masked Swift's rear doors' handles into a black area on the C-pillar.

Inside, the Japanese carmaker kept its promise to offer a roomy cabin fit for four. There was room for three in the back, especially if they were kids or teenagers. At the front, Suzuki worked hard to offer a much better and functional design. A silver panel divided the dashboard into two distinct areas, with the upper side reserved for ventilation and instrument panel, while the lower one was designed for storage compartments and the center stack. Suzuki offered, as an option, depending on the trim level, an infotainment system.

Suzuki removed the 1.3-liter diesel engine from the Swift's lineup and kept only gasoline, or mild-hybrid engines paired to either a manual or a CVT transmission with front- or all-wheel-drive. 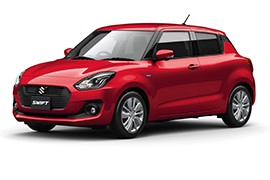