In the spring of 2016, Suzuki launched the Baleno hatchback on the European market.

Even though it wasn't a new name for the Japanese brand, the car tried to offer compact-class room in small class size.

Suzuki was well known as a big manufacturer for small cars. He tried to upscale its models but it didn't succeed. Its main products were the little Swift, the small off-roader Jimny and, of course, the Grand Vitara SUV. A car that it wasn't that grand, but it was a well received SUV by the market. How about the Baleno? Was it enough for the market?

From the outside, the Baleno featured a small grille between two bigger headlights. The front fascia was rather flat than raked. The A-pillars though were a different story. They had to be raked to give a sportier look of the car. From the side, the Baleno was a mix between a small-class hatchback and a small-class SUV.

Despite its overall length that was on the small-class size, the interior room was big. Its trunk was large enough to compete in the compact-class. The rear seats could have been folded in a 60:40 split way. In the front, the Baleno featured a 7” infotainment system on the dashboard and a 4.2” display between the dials in the instrument cluster.

The Baleno was available with two engine choices, both with gasoline. Both were mated to a standard 5-speed manual. A 6-speed automatic was available as an option for the top version. 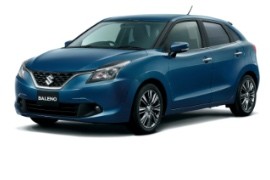