In 2013 Subaru dropped the name Impreza from its list and used only the former versions: the WRX STI. Fortunately, it didn't drop the performance compact sedan.

The 2013 WRX STI was launched with a pedigree behind. The car was known both on the streets and on the tracks. It dropped the hatchback version and returned to the sedan version and that was a plus for those who were looking for a family sedan with good performance. The air-scoop on the hood was typical for the Impreza and it was kept. Narrower headlights flanked the Subaru hexagonal grille. It was a more powerful stare thanks to new standard LED low-beam headlights.

The cabin was roomier than the predecessor, due to a longer wheelbase. For the driver, a flat-bottom steering wheel with tilt and telescoping adjustments was installed. The standard Recaro bucket-seats added a racy touch to the vehicle. The STI Design electroluminescent gauge panel featured a new 3.5-in. central LCD screen that displayed various functions, including low-level warnings for oil and windshield washer fluid and the selected gear.

The drivetrain included the well-known symmetrical all-wheel-drive Subaru system, equipped with the new Multi-Mode Driver Controlled Center Differential. The front limited-slip differential and the rear Torsen LSD helped the car in corners. Under the hood, there was the 2.5-liter boxer engine aided by a turbocharger. The only transmission available was a 6-speed manual. 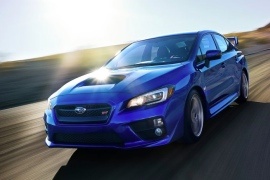