In 2003, Subaru introduced the fourth generation of the Legacy in both shapes, a sedan and a station wagon, and added a crossover version: the Outback.

While other carmakers had to work hard to develop vehicles for the new crossover market, Subaru had all the ingredients to build one and compete for the top-selling charts. Its only serious rival was the Audi A6 Allroad Quattro, which was much more expensive and played mostly in a different league.

The Outback was introduced for the first time on the second Legacy generation under the Legacy-Outback name. Over time, it evolved as a different nameplate in the Japanese carmaker lineup, even though it was based on the Legacy Wagon model. It featured a higher ground clearance and specific plastic moldings on the side, plus a pair of redesigned bumpers. The one in the front sported two large fog-lights. At the lower part, the plastic moldings were left unpainted.

Inside, the front bucket-seats provided good side support. Subaru's designers installed a split-folding bench for up to three passengers in the rear, but with less room for the middle one since a transmission tunnel crossed the station wagon from front to back.

Subaru installed only two engine choices under the hood, with four and six-cylinders boxer engines paired to the Japanese brand's well-known symmetrical all-wheel-drive system. Depending on the market and trim level, the carmaker installed manual or automatic transmissions. 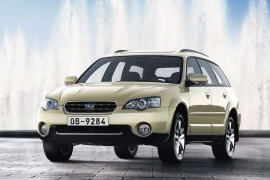 2 Mama Bear Has a Sleepover in Someone’s Subaru, Throws Quite a Party

4 Subaru Recalls Nearly 60,000 Units of the WRX to Replace the Backup Lamp Switch