Subaru introduced the first generation of the Levorg on the Japanese market in 2014, followed by the rest of the world in the following year.

The Japanese created the Levorg as a crossover, replacing the station wagon version of the Legacy. Even though it was based on the same platform as that model, the marketing team considered that a new name in the stable would increase sales.

Usually, Subaru didn't pay too much attention to the car's design. It spent more money on wrenches than on pencils. Thus, its cars were well-engineered but poorly designed. But that changed, and the Levorg benefited from a better-looking front fascia. The C-shaped daytime running light placed inside the headlamps emphasized the car's dimensions. They flanked the bold hexagonal grille surrounded by a chromed rim while, at the bottom, the carmaker installed a narrower secondary grille and the LED foglamps. From its profile, the car revealed a slightly sloped-down roof ended with a spoiler mounted on the upper side of the raked-forward tailgate. Thus, the car offered the image of a sporty wagon and was emphasized by the flared rear quarter panels.

The interior was fitted with bucket seats at the front with high-bolstered areas. After all, Subaru was known for its sporty driving behavior. At the back, the split-folding bench offered enough room for three passengers.

Under the hood, Subaru installed a choice of two turbocharged gasoline engines: a fuel-efficient 1.6-liter and a punchy 2.0-liter. Both of them were flat-four and mated to Subaru's Lineartronic CVT gearbox that sent the power in all corners. 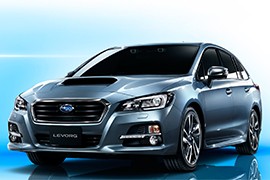 5 Mama Bear Has a Sleepover in Someone’s Subaru, Throws Quite a Party