5 Subaru Embraces All Things Winter With Its Annual WinterFest Event

The BRZ was a joint program between Subaru and Toyota and it was often named as Toyobaru or Subyota. Whichever works. But the result was a great handling car, designed for smiles per miles.

Toyota tried to make a comeback on the fun-to-drive car category. After it cut the Supra, the all-wheel-drive Celica and the MR2, it didn't have any other vehicle to bring a smile on the petrolheads' faces. Subaru, on the other hand, didn't have the financial power to develop such a complex program of a new sports-car. A deal was signed and the Subaru BRZ / Toyota GT86 / Scion FRS was born.

The low front end of the car was Subaru's merit. The flat-four engine was shorter than any other inline-four unit. Since the front end was short, the whole car seemed longer than it was. A low greenhouse with a raked back accomplished the mission to design a sporty vehicle. There were some styling differences in the car to differentiate it from Toyota, but mainly the badges. The headlights and the taillights were specific for the BRZ and not connected to any design trend followed by the Subaru. The two exhausts were placed on the left and right of the car, on the sides of the center diffuser.

Inside, the low seating position was typical for a sports-car. The dashboard was straight and not tilted toward the driver. Two bulges on top of the dash covered the instrument cluster a two air-vents. Depending on the options, a navigation system was installed on the center stack.

Under the hood, the 2.0-liter Boxer engine was mated to a standard 6-speed manual. An automatic with paddle-shifters behind the steering wheel was offered as an option. Unlike most of the Subaru range, the BRZ was offered exclusively with rear-wheel-drive. 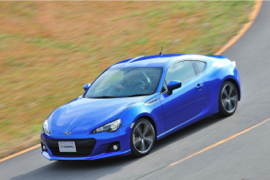