SsangYong revived the Rexton range with a significant facelift in 2021, which included changes in all areas, improving the company's flagship.

After 65 years, the Korean carmaker was already experienced in the offroad segment, and its products were good enough for its price range. Its main problems were the name, which was difficult to spell by most people, and the dealer's network, which were scattered around the world but without too much consistency. During the world financial crisis, the carmaker ended-up being bought by the Indian group Mahindra&Mahindra, which was also experienced in building offroad vehicles.

In 2017, SsangYong introduced the second generation of the Rexton, which was also known as the G4. It was still built on a chassis, but the design was a big step forward from its predecessor. The 2021 model was even bolder, with a new 3D mesh-grille design surrounded by a chromed, octagonal rim. Its new headlights were available as an option with LED.

Inside, the carmaker completely changed the dashboard and included a 12.3" TFT display for the instrument panel. For the infotainment unit, SsangYong installed a standard 8" touch-screen, while a 9" display with TomTom navigation was fitted as standard on the full-option version. Both systems featured wireless Android Auto and Apple CarPlay.

Under the hood, SsangYong kept the same 2.2-liter turbo-diesel engine developed in-house and upgraded to pass the 200 hp barrier. It was paired with an eight-speed automatic transmission. The 4x4 on-demand system featured high and low gear for extreme offroad situations. 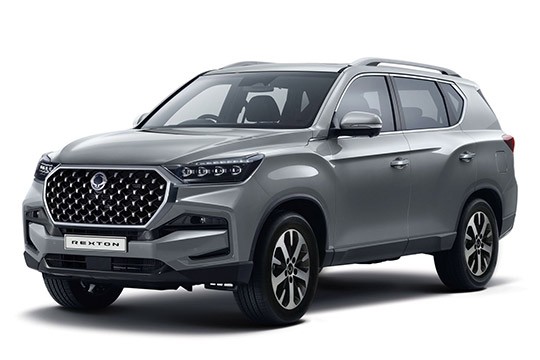