SsangYong retired the first generation of the Rexton from the market after 16 years and two facelifts and introduced a completely new model in 2018.

Between the first generation and the second, a lot of things happened to the Korean carmaker, and the biggest change was the ownership. The Indian group Mahindra&Mahindra acquired 70% of SsangYong's shares in 2011 and saved it from bankruptcy. With their financial help, the Korean carmaker was back on track and developed the Rexton G4 from the ground up. It was still built in an old-school way with body-on-frame construction, but other than that, it was better in any way.

When Mahindra&Mahindra acquired Pininfarina Studios, it was too late to make any other changes for the car's exterior, so it was left as the Korean designers made it. The massive flat front area and sculptured body panels offered a commanding look on the road. Its swept-back headlights and raked windshield offered a dynamic appearance. As part of the options list, a hands-free opening system was available for the tailgate.

While SsangYong couldn't change the exterior, the interior benefited from some special advice from Pininfarina specialists. They installed quilted leather upholstery on the seats and dashboard. Depending on the level, the cabin featured metallic or wood-trims, and it was real wood, not plastic. Thanks to its big wheelbase, it offered plenty of room for five occupants with an option for a seven-seat cabin.

Under the hood, SsangYong installed a 2.2-liter turbo-diesel engine as its main version and a 2.0-liter turbocharged gasoline unit for selected markets. Both were paired as standard to a six-speed manual, while an automatic was available at extra cost. 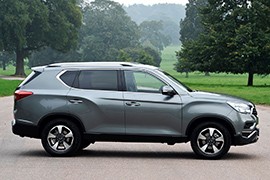