Two years after the brand was bought by the Indian group Mahindra&Mahindra, SsangYong introduced a significant facelift for its Korando SUV.

After the world financial crisis, SsangYong was on the brink of extinction, and in 2010, it was bought by Mahindra&Mahindra. Yet, its lineup mainly consisted of outdated models that made the carmaker lose money daily. To slow down that loss, the carmaker introduced a more appealing version of the Korando in 2013. Korando is an abridged term for "Korean Can Do." The initial design was penned by Giorgetto Giugiaro.

Sporting a completely redesigned front fascia, the 2013 Korando was hardly the same vehicle as before. Its new headlights with a taller inner side and the redesigned grille mimicked a smile, trying to attract more customers. Moreover, the bumper featured an unpainted lower area that didn't suffer from scratches and stone chips. Yet, the fog lamps on the outer side were unprotected in off-road situations. That's why the base versions were not fitted with those. At the back, the carmaker installed new taillights, leading to new rear quarter panels and a redesigned tailgate.

Inside, the carmaker didn't look like it invested too much. Yet, the dashboard was more user-friendly and sported new, curved shapes and a new infotainment screen on the center stack. Moreover, the car got front and rear heated seats, which was not something common. Last but not least, the car's safety was improved, and a tire-pressure monitor was included on the options list.

Under the hood, SsangYong relied on a 2.0-liter Euro V turbo-diesel engine in two power options. They were paired with either a six-speed manual or a five-speed automatic. 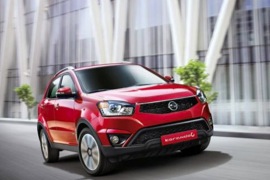