After finding its way out of bankruptcy thanks to the Indian industrial group Mahindra&Mahindra, the Korean carmaker SsangYong started to upgrade its brand power.

SsangYong was on the verge of introducing new cars in its lineup and, after the Tivoli and Tivoli XLV, it introduced a facelift for its compact SUV Korando. Believe it or not, Korando is an acronym for the Korean Can Do and showed its commitment to be successful in the crossover and SUV segments. It was the second facelift for the third generation of the compact SUV since its launch in 2010.

There were mild updates on the exterior. Apart from the sharper headlights and bigger fog-lights, the 2017 Korando featured curved slats on the grille. In the back, there were minimal differences noticed, especially on the slightly different bumper design. The carmaker was not so eager to apply too many modifications since it was already under the last mile to launch a new Korando generation.

Inside, the carmaker introduced new colors for the vents and a new steering wheel, depending on the trim level. Other than that, it kept the same four seated heats and the 7” touch-screen display for the infotainment system that allowed iPod and Bluetooth connectivity.

Under the hood, SsangYong had to introduce a new Euro 6 turbo-diesel engine. Thus, the car was ready to comply with European regulations. A 2.0-liter gasoline engine was available as well. Both engine versions were available with either a front- or an all-wheel-drive system. 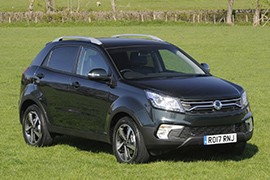