SsangYong introduced the third generation of the Korando range in 2010, and it was a good offer on the compact SUV market.

SsangYong went through some financial difficulties, and it was bought by the Indian group Mahindra&Mahindra. The 2010 Korando, an acronym for Korean, was developed on an entirely new platform. While SsangYong built its predecessors on a ladder-chassis, the third generation was based on a unibody construction, which greatly improved ride and comfort, even though it wasn't a true off-road vehicle. The Korean carmaker offered the car with a front, or all-wheel drive.

The design showed a huge improvement over its predecessors, not only on its range but also on the SsangYong lineup. With its angled, big headlights and the silver mesh-grille, it looked like a modern SUV, not as a rugged off-road vehicle designed by a beginner in the automotive industry.

The interior offered enough room for up to five adults, with bucket seats at the front and a bench in the rear. Moreover, the floor was flat, without any intrusion from the transmission tunnel, making the middle seat more useable. There was a downside, though, with the material quality, which didn't look as good as other Korean SUVs.

Under the hood, SsangYong installed two engine choices, both with two liters displacement. They were paired with either a 6-speed manual or a 6-speed automatic transmission. 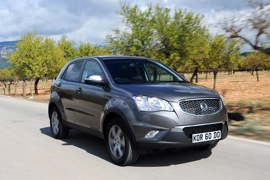