Spyker was an unusual carmaker who started as a coachbuilder in 1880 and built the first inline-six engine in the world, but its name died when it went bankrupt in 1925.

In 2000, Spyker's name was revived, and the first model produced was the C8. It was an unusual sports car with front and upward door openings and without any electronic nanny to keep the driver and the precious car on the road. It was hand-built and crafted with aeronautic-grade attention to detail. In 2001, the carmaker introduced a special edition named Laviolette.

At the front, the C8 Laviolette had the same ovoid-shaped headlights with four lamps inside them. The front fascia sported the silver twin-blade propeller badge in the middle above the mesh grille. Unlike the rest of the C8 vehicles, the Laviolette's featured a see-through, clear roof. The carmaker evoked the fighter planes that used to have transparent canopies.

Inside, the car unveiled its aviation heritage. The four-spoke steering wheel resembled a four-blade propeller, and the aluminum trims from the dashboard and center console inspired the same aviation theme. Spyker already knew that its customers were not focused only on the car's performance but also on the exclusivity and highest detail level in the sports car industry. Take the gear-stick, for instance. It was a lever mounted on two chromed bars. It was a unique sample of functional design never met before in any other car.

Under the hood, the C8 Laviolette featured an Audi-sourced 4.2-liter V-8 engine, similar to the one installed in the A8. Unlike the German flagship model, the C8 was rear-wheel-drive only. 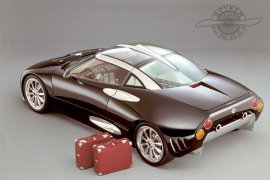 1 Barely-Driven 2006 Spyker C8 Spyder Has Audi V8 Goodness, Is Up for Grabs