smart introduced a special version of its Roadster Coupe version made in cooperation with Brabus and built only 50 of them.

Brabus made a fortune reshaping and rebuilding Mercedes-Benz cars, and the German carmaker asked the Swiss manufacturer to work its magic on the tiny little Roadster Coupe. The model was appealing in terms of looks, but it was sluggish in terms of performance. Brabus tried to fix that but went a little bit more than just upgrading the engine.

The carmaker already had a package offered as an option for several smart models, but with this little roadster coupe version, it dared even more. Thus, the car received a new front bumper, side sills, and rear apron. A set of six double-spoke, 17” light-alloy wheels fitted with wider tires than the non-Brabus version completed the sporty image of the car. At the back, a center-mounted dual-exhaust warned the bystanders that it was not a regular Roadster Coupe.

Inside the tiny cabin, fit for two, there was not too much to do. Yet, the Swiss manufacturer found a way to enhance that cabin, too, with the addition of new sports seats and a few Alcantara bits and pieces. Moreover, Brabus adorned the steering wheel and the gear knob with its badge. The latter also served as a start-engine button.

Under the hood, the car featured a modified version of the 0.7-liter, inline-three engine. Dubbed RCR SB2, this tiny turbocharged heart sent 101 PS (99 hp) to the rear wheels via the same six-speed automatic transmission. A gearbox that was way too slow for spirited driving, either in automatic or manual mode. 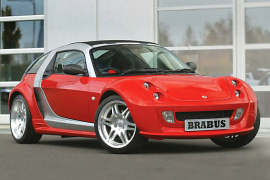