The smallest car built by Mercedes Benz was the SMART ForTwo and beside the coupe version, it was also offered as a cabriolet. A mini-cabriolet for the urban roads.

SMART didn't have any competitor on the market for a long period of time. Its minimalist design and lilliputian dimensions made the car fit for the most crowded cities in Europe. It was shorter than the width of a bus and it could turn on a dime due to its rear-wheel-drive concept. The convertible version was launched at the 2015 Frankfurt Motor Show but the customers had to wait a few months before first deliveries. But who needed an open-top mini city-vehicle in the winter, anyway?

The 2016 SMART cabriolet was easy to recognize due to its honeycomb grille design and its hexagonal headlights. The short front fascia didn't feature a trunk compartment. It was just a panel between the front bumper and the windshield. The A-pillars were not very raked as in a usual two-door vehicle, but more straight up as found on an MPV. The B-pillars were slimmer than on the closed version. The styling of the Tridion safety cell was more progressive, giving the smart ForTwo cabriolet an even sportier and more forward-focused look. 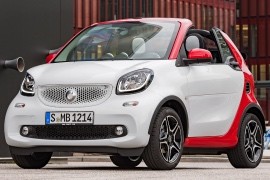