The smart automotive brand and division of Daimler AG produces microcars and subcompacts.

We're already used to the smart fortwo and the smart forfour, models with huge success due to their reduced size, thus increased efficiency in crowded cities.

But how about a more expensive smart fortwo without a windshield, roof, and doors? In 2002, smart launched a limited-edition version of the fortwo named the Crossblade. The car's weight was only 740 kilograms and was equipped with a Brabus tuned engine. The sporty-two seater is powered by a three-cylinder engine of only 599 cc, developing 61 hp, paired with a six-gear automatic transmission.

The crossblade has a McPherson front suspension and a De Dion rear suspension. Its braking system includes vented discs at the front and drum brakes at the rear.The top speed was limited to 135 km/h and reached 100 km/h in 17.0s.

As the car didn't have a regular windshield, it was equipped with a smaller deflector looking like the visor of a helmet, which moved the air on top of the cockpit area.The car is equipped with the same Tridion safety cell that protects its occupants as the regular fortwo. The metal shell is reinforced with high-strength steel at strategically points. Owners say it's definitely not a practical car, but mostly made for fun. 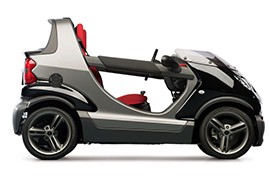