Skoda introduced the Scout trim level on the Octavia range in 2007, and due to its commercial success, it was introduced on its successors.

Skoda introduced the third generation of the Octavia in 2012, and it was a clear move into the mid-sized class from the compact-sized vehicles as it was in the first two generations. Five years later, along with the facelifted model, the Czech brand introduced the Scout level.

The Octavia was longer and wider than its predecessor, and it featured a few details that made the car clever. An ice-scraper in the fuel flap or the double floor mat in the trunk were just some examples. Octavia Scout was available only as a station-wagon, and it featured a higher ground clearance than the non-Scout siblings. The "off-road" stance was enhanced by plastic molds around the wheel-wells and a silver shield under the front bumper. Both bumpers featured black aprons with hard plastic to cope better with stones-chips. The Scout version featured standard 17" light-alloy wheels.

Inside, the Octavia Scout featured a raised seating position for better visibility around the car while going on unpaved roads. It was more of a crossover vehicle, not an off-road one. For cold weather, Skoda offered the heated steering wheel and seats as a standard feature. The instrument cluster was carried-over from the regular Octavia.

Under the hood, the Octavia Scout was offered with a choice of three engines: one gasoline and two versions of the same 2.0-liter turbodiesel unit. All versions sent the power in all corners via a Haldex center differential. Depending on the engine version, a 6-speed automatic (DSG) or a 6-speed manual was standard. 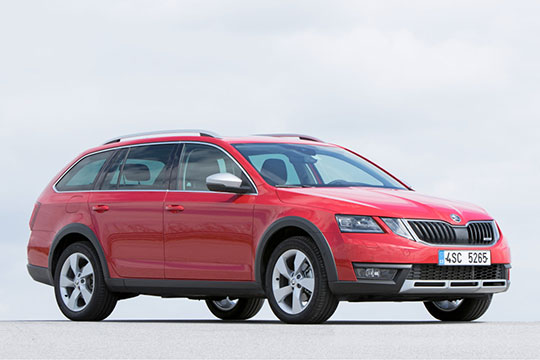 2 Forget About the Old Paint, Skoda Has a New Environmental-Friendly Recipe