Since the 2020 Geneva Motor Show was canceled, the Czech carmaker chose to show its newest products online.

Besides the claimed new top-performer Octavia vRS iV, the Combi version was shown too. It has the same powerplant under the hood, consisting of a 1.4-liter TSI gasoline engine and an electric 85kW motor. The plug-in hybrid has a combined power output of 245 hp and 400 Nm (295 lb-ft) of torque.

Inside, there is more headroom for the rear passengers and more trunk-space than the sedan version. It has 490 liters, which is more than the sedan vRS, but it is smaller than the third generation. The new vRS has the car's battery inside the trunk. Another downside is the performance factor. The previous generation of the RS was quicker. Even the current generation of the regular Octavia has two versions that are quicker than the vRS. The 190 hp 2.0-liter TSI version can do the 0-100 kph (0-62 mph) sprint in 6.9 seconds, compared to the 7.3 seconds needed by the vRS. Even the 2.0 TDI is faster, with 7.1 seconds needed for the same sprint.

But, after all, the new vRS is aiming at people who are more eco-friendly and want electrified vehicles without giving up on performance. 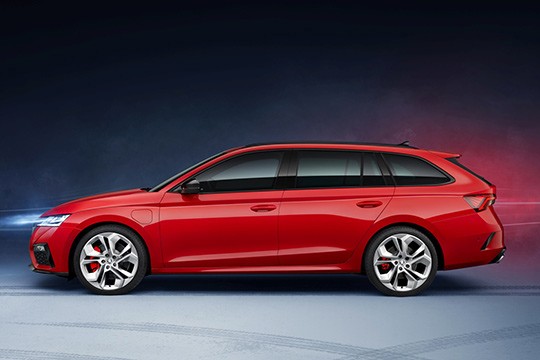