After the successful range of vRS vehicles offered by Skoda, the Czech car-maker decided to build a station-wagon with the same engines and features. It was unveiled at the Goodwood Festival of Speed in 2013.

Some parents want a vehicle suit for the entire family but, once the other family members were dropped to schools or jobs, the rest of the road might be driven faster. The station-wagon vRS was exactly that kind of vehicle, with a powerful engine for the size of the car. A hot-hatch trapped into a station-wagon body. That was the third generation of the Octavia RS Combi, with sporty-looking wheels, a roof-spoiler in the back, and an aggressive front bumper and apron. It was the most powerful and fastest Skoda ever built, at the time of its launch.

Inside, there was enough room for five passengers, but it featured front bucket-seats with high bolsters good for fast cornering. The dashboard and the instrument cluster was common with other Octavia models, but the steering wheel was different, with grippier zones for thumbs. The aluminum pedals completed the sporty image of the car. 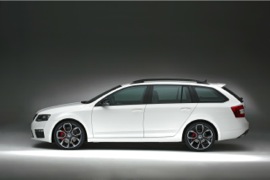