Skoda opened a factory in India in 2019 and started to build cars there to avoid the high custom taxes, and in 2021 it launched a market-specific model: the Kushaq.

The name Kushaq derived from the Sanskrit word Kushak and meant emperor or king. Skoda tried to make the car a new segment champion, and steal the crown from the Hyundai Creta, its main competitor. It developed and produced in India, based on the MQB-A0-IN platform, derived from the MQB one used for more vehicles within the Volkswagen Group. It was shorter than the European Karoq and used a simple recipe: higher ground clearance, lots of standard features, good safety, and a price as low as possible.

Kushaq's exterior left no doubts about its crossover roots. Its angular lines resembled the cubist trend followed by the Czech carmaker. At the front, the fat bumper featured a lower silver shield at the bottom. Depending on the trim level, Skoda installed LED headlights and standard LED taillights for the entire range. The large wheels and flared wheel-arches, with their black moldings, created an SUV stance.

Inside, Skoda continued the cubist design theme with a minimalist dashboard design and a storage space on top of it. The infotainment unit, installed as a floating device above the center stack, enhanced the driving experience. It allowed Apple CarPlay and Android Auto connectivity. In the instrument cluster, the big dials for the speedometer and tachometer flanked an LCD. Skoda installed two bucket-seats at the front and a 60/40 split-folding bench in the back.

Under the hood, the carmaker offered the Kushaq a choice of 1.0-liter and 1.5-liter turbocharged gasoline engines paired to a six-speed manual or a seven-speed automatic (dual-clutch) transmission. All versions featured front-wheel-drive systems. 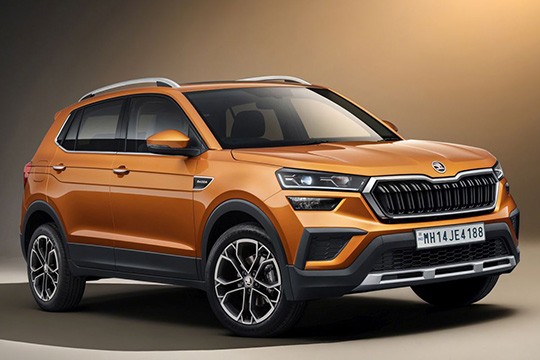