Soon after the Czech carmaker was taken over by Volkswagen, it created a particular line of sporty products named vRS.

Thus, it confirmed its motorsports heritage, dating back to the late 1800s.

Times were changing, and Skoda had to adapt to the new environment. It had to ditch the internal combustion vehicles from its lineup, but it couldn't do that all of a sudden. After introducing a few electric cars in its lineup, the carmaker stepped up the pace and dared more with the Enyaq Coupe vRS.

Based on the same EMB platform as the regular Enyaq iV, the vRS version offered more power and torque than its standard sibling. Moreover, it added a more aggressive exterior design. For starters, the carmaker provided a unique lime-green color named Mamba Green reserved exclusively for the vRS. That contrasted with the black slats on the grille and on the side scoops. Obviously, since it was an electric vehicle, it didn't need large cooling areas. Aesthetically speaking, these were needed because customers were used to seeing them installed on cars. Like all other vRS models, the sportiest Eniay Coupe iV received a full-length red reflector on the rear bumper.

Like its non-vRS sibling, the Enyaq iV Coupe featured a sport chassis as standard, with a lowered ground clearance than the non-Coupe version. For the sportiest version, the carmaker installed a choice of light-alloy wheels up to 21" in size.

Inside the vehicle, the front seats featured vRS badges embroidered on the headrest. At the same time, the split-folding bench could accommodate up to three passengers in the back. As a final enhancement compared to the regular Enyaq iV, the Coupe vRS featured a panoramic glass roof enhancing interior lighting. 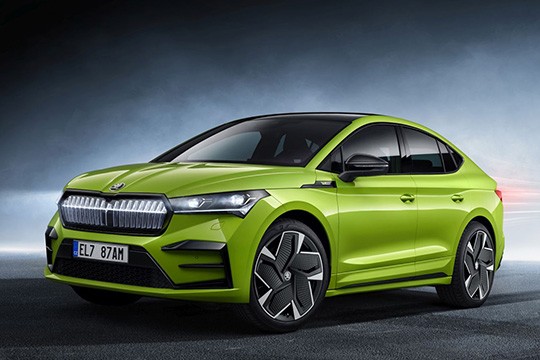