Skoda introduced a Coupe version for the Enyaq iV in 2022 and made a step further towards its complete electrification program.

When BMW introduced the X6 SAC (Sports Activity Coupe) in 2007, it was unique on the market. In the beginning, customers were reluctant to that design. However, after the financial crisis ended, the market showed that the Bavarian carmaker was right when it offered it. Meanwhile, on the mass-market segment, there was no competitor present. Finally, after a few years, the French carmaker Renault introduced the Arkana, and it was successful.

As part of the VW group, Skoda didn't dare to build something like that until 2022, when it unveiled the Enyaq Coupe. It was based on the same MEB electric platform used by its VW siblings, such as the ID.4. The SUV's aerodynamic profile with a drag coefficient of just 0.234 was among the best in class. That allowed the vehicle to travel up to 545 km (338.6 miles) between recharges.

The most striking news about the car was the shape, which featured a sloped-down roofline, thus creating a sportier profile. At the back, the angular, curved tailgate line contrasted with the angular design of the taillights, showing a more muscular appearance.

Inside the vehicle, the sport seats at the front contrasted with the rear split-folding bench could fit three passengers. One particular detail about the car was the standard panoramic glass roof, which enhanced the interior light. In addition, to show its concern about the environment, Skoda installed natural, sustainably processed, and recycled materials. 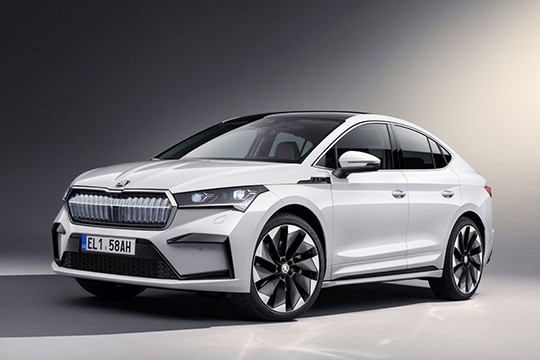