The electric-car frenzy made the Czech car-manufacturer to build the 2019 Citigo small-car model as a full-electric model with a big autonomy, enough to roam around town.

The need for electric vehicles was high and car-manufacturers around the world started to offer various vehicles. The Volkswagen Group offered a small electric vehicle lineup with three badges: Seat Me, Volkswagen UP!, and Skoda Citigo iV. Basically, the three vehicles shared the same assembly line, and it was only a badge-engineering. In the end, it was all about styling and pricing.

The Skoda Citigo iV was the most affordable of all three models and it has its own style and specific design to attract its customers. Since it didn't have an internal combustion engine under the hood, it didn't need an actual grille. The Skoda's designers chose to install the 21 vertical bars on a frame to mimic a grille. That pattern was also used for other cars in the lineup. The Citigo iV was fitted as standard with 14" steel wheels, on the Ambition trim level. For the Style trim level, 16" light-alloy wheels were offered as standard.

Inside, the car was fitted with minimum requirements for a car that goes around town for the daily commute. There were some specific options such as infotainment system, parking sensors, insulated windows, or heated front seats.

For the drivetrain, the Citigo iV featured an electric motor on the front and a battery in the floor. It consisted of a total of 186 cells and allowed a range of a maximum of 265 km (160 miles). It had the ability to be driven as a single pedal drive. 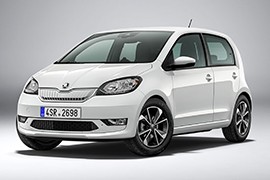